President Donald Trump and his challenger Joe Biden have fiercely clashed in one of the most chaotic and bitter White House debates in years.

Mr Trump frequently interrupted, prompting Mr Biden to tell him to "shut up" as the two fought over the pandemic, healthcare and the economy.

The US president was challenged over white supremacist support and refused to condemn a specific far-right group.

But with 35 days until election day, surveys from several important states show a closer contest.

Polls also suggest one in 10 Americans have yet to make up their mind how to vote. But analysts said Tuesday night's debate - the first of three - probably would not make much difference.

What were the key moments?

Overall, the 90-minute debate in Cleveland, Ohio, was light on serious policy discussion. Both candidates talked over each other but Mr Trump cut in some 73 times, according to a count by CBS News.

The tenor became clear early on as the two candidates sparred over healthcare. Hectoring from Mr Trump saw Mr Biden call the president a "clown".

As they moved on to the Supreme Court, the rancour continued, with Mr Biden refusing to answer when asked if he would try to expand the number of judges.

In one of the most talked about exchanges of the night, the president was asked by the moderator, Fox News anchor Chris Wallace, if he was prepared to condemn white supremacists.

He initially said he would but when asked to denounce the far-right Proud Boys group by name, he sidestepped.

Mr Trump said: "Proud Boys, stand back and stand by, but I'll tell you what, somebody's got to do something about antifa and the left."

The Proud Boys, an anti-immigrant, all-male group, took to social media to celebrate. "Standing down and standing by sir," it posted on Telegram.

Antifa, short for "anti-fascist", is a loose affiliation of far-left activists that often clash with the far right at street protests.

Earlier, Mr Biden said: "This is a president who has used everything as a dog whistle to try to generate racist hatred, racist division." 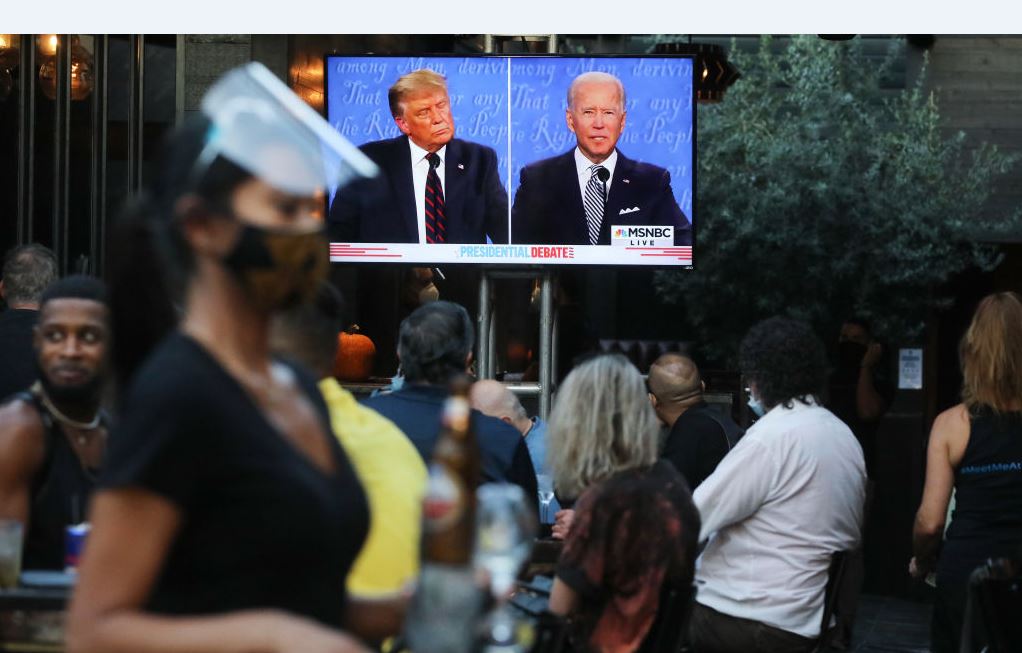 The debate in numbers

What did they say about coronavirus?

Mr Biden said Mr Trump had "panicked" over the coronavirus pandemic, which has killed more than 200,000 Americans.

"A lot of people died and a lot more are going to die unless he gets a lot smarter, a lot quicker," Mr Biden said.

Local rules required everyone in the room to wear masks but of the president's family members present, only US First Lady Melania Trump donned a face covering during the debate.

Due to the pandemic, the forum at Case Western Reserve University had a small, socially distanced audience and the traditional opening handshake was skipped.