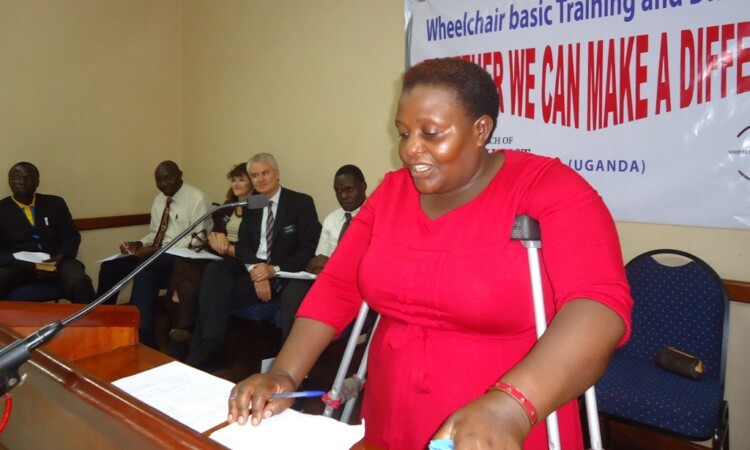 The Persons with Disabilities (PWDs) Representative for Central Uganda, Hon Safia Nalule Juuko was appointed the Chairperson of EOC replacing Sylvia Nabatanzi Muwebwa who is facing corruption charges in the Anti-Corruption Court.

At the time of her appointment to EOC, Hon Nalule was also serving as a backbench parliamentary commissioner whose term expires with the tenure of the 10th Parliament. Other members who were appointed include; Ojok Joel Cox (Vice Chairperson), Denise Tumusiime, Zaidi Ibrshim Edema and Sr. Mary Wasagali who are all members.

The presidential appointees will be vetted by the Parliamentary Committee on Appointments for approval. The Equal Opportunities Commission is a constitutional body mandated to eliminate all sorts of discrimination and inequalities against any individual or group of persons for the purpose of redressing imbalances which exist against them, and to provide for other related matters.

Nalule’s appointment as chairperson of EOC has received a huge applause considering that the disabled legislator has been very instrumental in fighting for rights and freedoms of the marginalized.

Together with the PWDs Representative for Eastern Uganda, Hon. Helen Grace Asamo, the Chairperson of Equal Opportunities Committee, Nalule Juuko contributed to aligning the Persons with Disabilities (Amendment) Act 2019 to the international conventions on disability rights before it was passed. Nalule has also played a pivotal role in spearheading legislation, awareness and fundraising campaigns to benefit persons with Albinism.

She was recently granted leave of Parliament to bring a private members’ bill titled the Persons with Albinism Bill 2019 which intends to cater for the interests of persons with albinism in Uganda including data compilation of albinos in Uganda for easy planning.

While at Parliament, Nalule and other female legislators have played a key role to ensure that government entities comply with gender and equity requirements.

As a result, reports from the Equal Opportunities Commission for the last four years show better government performance in gender and equity responsiveness. For example, compliance to the gender and equity requirements across all government ministries and departments increased from 57% in FY2016/17, to 61% in FY2018/19 and 68.9% in FY2019/20.

There is no doubt that with Nalule at the helm of EOC, compliance to gender and equity among government entities will hit an 80% mark. Nalule has been in Parliament since 2006.